Leigh, Georgina, Hayley, Andre, Daniel, Shane and Julia from AbPhab talked about Hate on Twitter. Here is their report:

Twitter allows communities across the world to come up with good ideas or stand up for their rights.

So how does it work?

Anyone over 13 can sign up or register to use Twitter. People registered to Twitter may write a message about what they think or feel and post the message online. Anyone with an Internet connection can read the messages. Twitter works a bit like birds tweeting or chirping to each other across trees in huge forest. Twitter has 500 million tweets a day!

Twitter is a good way to spread news and make people think and learn. Here are some examples. 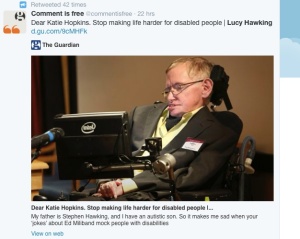 A woman called Lucy Hawking wrote a letter about disabilist language which was published in the Guardian newspaper.  The letter explained how disablist language can hurt people. Many people read the letter because they heard about it on Twitter.

We use Twitter to make people aware of disability bullying and hate crime.

Twitter is a company that invented a very clever technology to help people share who they are with the world. The company has a responsibility to provide a safe space for all people. This is especially important because the company Twitter is encouraging people to share. People share pictures of themselves, their ideas, their thoughts and their identities. Companies that provides a space for young people must make sure that everyone is safe from hateful comments and behaviour.

You can mute or block or report hateful messages. But is Twitter doing enough to keep everyone safe? Can Twitter do more? Can everyone do more to stop hate?